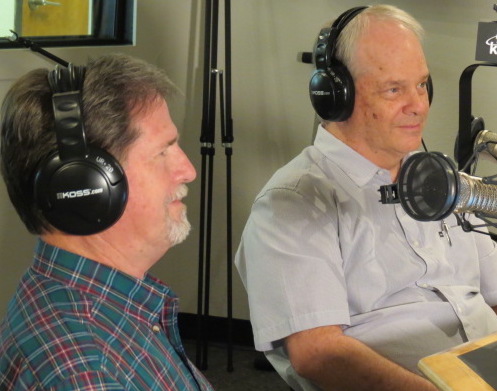 “I got to tell you, it's great getting out of the People's Republic of Austin. As you're driving... as you leave Austin and start heading up North you start feeling different and once you cross the Travis County line, it starts smelling different and you know what that fragrance is? Freedom. It's the smell of freedom that does not exist in Austin, Texas." -- Texas Gov. Greg Abbott

Rev. Jim Rigby of St. Andrew's Presbyterian Church in Austin, and noted Democratic strategist and Rag Radio analyst Glenn Smith, are Thorne Dreyer's guests. They discuss Texas' draconian new "sanctuary cities" law, as well as the state's multi-faceted legislative assault on the City of Austin, including what Austin Mayor Steve Adler recently referred to as Texas Gov. Greg Abbott's "war against [Texas] cities." Much of the legislation in an upcoming special legislative session is aimed at overturning Austin city regulations covering such things as tree preservation!

A February Washington Post headline called Austin "The 'sanctuary city' on the front line of the fight over Trump's immigration policy." It singled out the city's defiant sheriff, Sally Hernandez, and the human-rights activism of Rev. Jim Rigby, who is a leader of the Austin Sanctuary Movement, a multi-denominational network of congregations pledged to shelter immigrants fearing persecution. Rigby, a longtime activist for social and economic justice, was recently one of more than 20 protesters, including two Austin elected officials, arrested during a sit-in at the Texas State Capitol. This is Jim's fourth visit to Rag Radio.

Glenn Smith is an op-ed columnist for the Austin American-Statesman, the director of Progress Texas PAC, a columnist for Quorum Report, and a former political reporter for the Houston Chronicle and Houston Post -- and he managed Ann Richards' winning 1990 Texas gubernatorial campaign. Glenn has been our guest multiple times.
Rev. Jim Rigby, left, and Glenn Smith at the KOOP studios. Photo by Roger Baker.Rag Radio is produced in the studios of KOOP 91.7-FM, an all-volunteer, cooperatively-run, solar-powered community radio station in Austin, Texas, in association with The Rag Blog and the New Journalism Project, a Texas 501(c)(3) nonprofit. The host and producer of Rag Radio, Thorne Dreyer, is a prominent Austin-based activist and writer who was a pioneer of the ’60s underground press movement. The show’s engineer and co-producer is Tracey Schulz and the staff photographer is Roger Baker. The syndicated show is broadcast (and streamed) live Fridays, 2-3 p.m. (Central) on  KOOP, and is later  rebroadcast and streamed on WFTE-FM in Mt. Cobb and Scranton, PA., on Houston Pacifica's KPFT HD-3 90.1, and by KKRN, 88.5-FM  in Round Mountain, CA -- and as a featured podcast at Veterans Today Live.